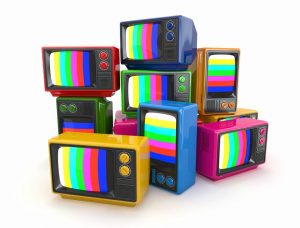 I’m old enough to remember being super excited about the introduction of colour television in 1975. What a difference it made!

The Tardis was blue and the stripes of the Dr’s scarf were so many shades of Autumn, Skyhooks burst onto the screen in glorious technicolour and full make up, belting out ‘Horror Movie’ on Countdown, and Mary gleefully tossed her blue knitted beret into the air at the start of each episode of The Mary Tyler Moore Show.

Just as colour breathed new life into these familiar programs, adding colour to your writing can do the same.

Here are four quick tips to help you brighten up your work.

1. Start with a story

Research shows our brains love good storytelling. Stories are an effective way to engage, motivate or persuade. They can humanise just about any topic. They grab our attention immediately and stay in our minds afterwards.

Think of the start of Obama’s 2008 victory speech:

This election had many firsts and many stories that will be told for generations. But one that’s on my mind tonight is about a woman who cast her ballot in Atlanta. She’s a lot like the millions of others who stood in line to make their voice heard in this election except for one thing—Ann Nixon Cooper is 106 years old. She was born just a generation past slavery; a time when there were no cars on the road or planes in the sky; when someone like her couldn’t vote for two reasons—because she was a woman and because of the colour of her skin. And tonight, I think about all that she’s seen throughout her century in America—the heartache and the hope; the struggle and the progress; the times we were told that we can’t, and the people who pressed on with that American creed: Yes we can.

Even just the hint of story can be enough to jazz up your writing and hook your readers. For example, here’s my introduction for a business magazine article about a security service:

Not many successful Canberra businesses get away with rewarding their staff with a pat on the head and a juicy bone. But when your team includes a canine (K9) unit, that sort of reward is greeted with real enthusiasm.

And here’s another introduction based on a story—this time for an article about building working relationships:

On the weekend we held a spy-themed birthday party for our 8-year-old: a day of organised chaos with pin the sunglasses on the spy, water pistol target practice, a backyard laser beam challenge, and secret clues leading to the hidden piñata. Tidying away the ‘Top Secret’ paraphernalia afterwards, it occurred to me that, along with birthday cake and ice blocks, the day served up some useful lessons about building good working relationships.

Case studies, personal profiles, short snapshots or longer features are other effective ways of using stories to explain policies or programs, bring facts to life and add credibility, interest and depth to your writing.

If you have to include technical details or complex concepts, find a way to add an explanation, context or description to help readers understand.

For example, ’15 million megawatt hours of renewable source electricity’ means a lot more when context is added explaining that this is enough electricity to power around 2.4 million average Australian households for a year.

The same applies to jargon—if you can’t avoid it, at least explain it.

Numbers, especially big numbers, can be challenging to comprehend.

For example, serious and organised crime costs Australia around $36 billion a year. Visualising that much money is tricky for most of us, but it suddenly becomes real if we say that’s about three weeks pay, from the entire workforce.

Don’t settle for mediocre. Brighten up your writing by selecting more meaningful words and phrases.

One way to do this is to be precise. Recently I was editing a document that described heritage-listed buildings as ‘interesting’. In this instance, words like ‘charm’ or ‘character’ could be used to add colour and convey more than the generic term ‘interesting’.

Wordplay is another option. This might involve unusual word combinations—in an article about deciding what to leave out, for example, I explained how to avoid getting bogged down in ‘content quick sand’. Or you might play with puns or words that are linked in some way, like unlocking key messages.

Another option is to use alliteration (repeating the same sound at the beginning of words) to add interest, character and rhythm. For example, five fast fixes to add flavour to your writing, the cost of grammar gaffes and better bullet points.

All the words I use in my stories can be found in the dictionary—it’s just a matter of arranging them into the right sentences.
Somerset Maugham